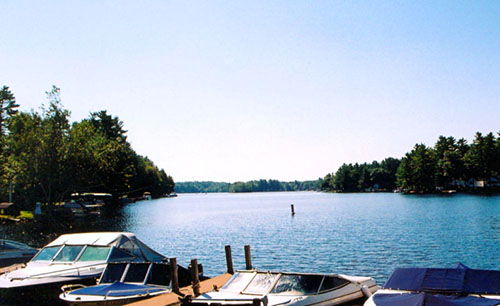 From the deck of Fern Nissim’s waterfront homes Shrewsbury Ma, the view of Lake Quinsigamond is captivating. On a late summer afternoon, sunlight shimmers on the ripples trailing behind a little motorboat as it putters across the watery neighborhood known as Half Moon Bay. The boat’s passing gently rocks a raft, enticing swimmers for one last dive before dinner. The peaceful scene belies its urban location. The lucky souls who live on the waterfront homes Shrewsbury Ma can easily pretend the city is far way.

Nissim used to live on the Hudson River in New York and when she moved to Massachusetts seven years ago, “one of my prerequisites was that I’d live on the water,” she said. “I love the ambience, the light and the textures.”

The waterfront homes Shrewsbury Ma on the lake is the focal point for the Victorian-style house designed by Nissim’s husband, Robert Murphy, in collaboration with architect Michael Hally of Westboro. Through a wall of windows off the living room, the lake is the first thing you see when you enter. There are more water views from Nissim’s office window and a porch off the master bedroom.

While the outside of this waterfront house looks Victorian, inside it is full of light. There are 30-foot ceilings in the living room that is furnished with antiques. There are more Victorian touches throughout, such as newel posts, crown moldings and a shark’s tooth border on the porcelain flooring in the entryway.

Perched high on a 100-foot lot, the 3,200-square-foot home dwarfs its neighbors, as do most of the other new houses on the waterfront homes Shrewsbury Ma Every year more of the funky little waterfront cottages that dotted the shores of Lake Quinsigamond, Shrewsbury, Ma for the past century are being torn down, built up and remodeled to reflect their new owners’ interpretations of waterfront living.

“We’re an eclectic mix who choose to live here because of the lake’s attraction,” Nissim said. Being a boat owner is something they all share in common, but residents’ boats range from kayaks to 30-foot powerboats. Many favor the more leisurely pontoon boats.

Nissim said she and her husband are not typical boat people. “What appeals to us is the environment of the lake,” she said. “It’s a theater in the round of nature. Our house is right along the migratory path for cedar waxwings, and it’s not unusual to see great white herons on this end of the lake.”

In stark contrast to the new construction on the lake are the homes and cottages that contain ghosts of the past.

Teri Ledoux’s waterfront house on the Shrewsbury, Ma shore near White City was built in the 1890s and is one of the oldest residences on the lake.

At the turn of the century, it was an elegant hunting and fishing lodge; today the house shows its age. It retains an authentic Victorian character, however, with features such as mahogany woodwork, a ceramic tiled fireplace in the sitting room and leaded glass in cabinet doors.

Ledoux’s parents bought the house in 1955. To their children, the lake was better than a backyard.

There was a gang of us — none of us old enough to drive, but we all had boats,” Ledoux said. “We’d gather in the middle of the lake to water-ski. My older brother Larry was one of the first barefoot water-skiers on the Lake Quinsigamond ”.

Ledoux’s favorite memories are of those carefree, childhood days. “There weren’t fears of strangers at that time; everybody knew each other,” she said. “We had great freedom. We were outside all summer long.”

There was a little beach on the White City side of the lake where Ledoux and her friends gathered to swim. “I loved the fresh, clean feeling you’d have after a swim in the lake,” she said.

Now Ledoux paddles her kayak on the lake — and takes great pleasure in spotting wildlife. “I’ve seen osprey and blue herons,” she said.

Sometimes, she notes, the lake gives back in unexpected ways. Ledoux shows a visitor a plum tree thick with fruit growing on the shore in front of her house.

“Nobody in the family ever planted a plum tree,” she says, guessing that someone in a passing boat tossed a pit and it took hold on the shore.

Lincoln Pearson grew up on the waterfront of Lake Quinsigamond during the Depression and remembers delivering the newspaper to a couple who lived on Plum Island, not far from what is now Quinsigamond State Park. The young Pearson would leave the paper stuck in a fence at the edge of the lake; the husband would pick it up on his way back from work and row out to the island.

“I’d collect for my deliveries twice a year,” Pearson recalled. “In the summer I’d canoe out to the island and in the winter I’d skate out. The papers were 10 cents a week, so I’d collect about $2.70.”

Pearson’s father owned three cottages on the lake. He insulated one of them so the family could live there all year. Pearson returned to Worcester after serving in World War II, married and settled in the family cottage at the south end of the lake. He and his wife live there still. (update Pearson passed away Feb of 2011)

“When our daughter was young we had a ritual every evening in the summer,” he said. “Before dinner we would each take a turn water-skiing from the south end of the lake up to the bridge over Route 9, then once around Half Moon Bay and back.”

Like many other Worcester and Shrewsbury, Ma retirees, Pearson has many stories of the White City Amusement Park where he rode his first roller coaster. He also remembers the big alligator scare.

There was a pool in the amusement park that was stocked with alligators, he explained. “At one time supposedly one of the alligators got out into the lake. I remember a police boat going up and down the lake and a police officer with a megaphone telling everyone to get out of the water because there was an alligator loose.” The alligator story has become one of the lake’s urban legends.

Sunset Beach has been part of the lore of Lake Quinsigamond for more than half a century. A generation of Shrewsbury and Worcester residents spent summer afternoons swimming off the shores of Sunset Beach on the stretch known as Old Faith Bay. Today it’s their grandchildren who are whooshing down the old water slide or paddling about in the inflatable kayaks known as “funyaks.”

The Mulcahy family has operated the park at Sunset Beach since 1943. The manicured grassy lawn, painted wooden towers and flotilla of little paddleboats seem untouched by time.

Patriarch Philip “Buddy” Mulcahy can be found behind the counter of the concession stand doling out slushies and french fries to busloads of day campers. Mulcahy has plenty of help from his many grandchildren who work alongside him. “It’s a labor of love,” he said.

Five miles up the lake at the narrow, north end it’s a different world. The boat traffic there is mostly sculls and sailboats; the shores are peppered with condos. But the residents’ appreciation for life on the lake seems no less enthusiastic than their neighbors to the south.

Martha and Andrew Boyd’s affection for Lake Quinsigamond grew out of their son’s rowing experiences. Martha used to drive Simon from their home in Worcester for pre-dawn practice with the St. John’s High School crew team. Both parents were on the shore cheering for the rowers in all kinds of weather during spring and fall meets.

As a cadet at the U.S. Military Academy at West Point, Simon, (now a captain in the U.S. Army) was on the crew team. When they traveled to Worcester to compete, Martha cooked spaghetti dinner for all 120 team members and coaches. After Simon graduated in 2003, the Boyds continued as adopted parents for the team for another three years.

As empty nesters, the Boyds were looking to downsize and found a waterfront condo at Lake Quinsigamond’s Eastern Point. They bought it and on his next visit home surprised their son with the new location. He was a little indignant.

He asked us, ‘You couldn’t have thought of this sooner?’ ” Martha said.

He’s far from a real estate magnate, but Shrewsbury resident Michael Paika has what many people can only dream of owning: his very own island. Although it’s in the middle of Lake Quinsigamond instead of the South Pacific, when a visitor strolls the wooded path on Blake Island, it’s pretty easy to imagine being far from civilization.

A centerpiece of the island is a totem pole Paika bought from the estate of Princess Evening Star, a Wampanoag Indian. He explains that the Native American ancient symbol of hospitality is also a reminder of the original area residents.

Paika purchased the island in 1986 from a former resident who moved to Texas to work for NASA. He re-named the island for his son and taught him to swim there.

“I’d run up and down the shore pulling him on a Styrofoam float,” he said.

While he tolerates visitors who appreciate the island’s amenities — there is a tiny beach and a couple of benches where the views are especially scenic — Paika is dismayed at the amount of litter people leave behind.

“When I first bought the island, I took away 50 bags of trash,” he said. Every week during the summer he fills at least one bag with bottles, cans, even disposable diapers.

Paika didn’t grow up on the lake, though his father took him fishing there, and he learned to sail at Regatta Point. “I liked the lake so much that I rented a cottage and eventually bought it,” he said.

He has lived on Half Moon Bay for 32 years and owns several cottages in addition to the island. Paika is a member of the Lake Quinsigamond Watershed Association and has been one of the commissioners of the lake for 15 years. He’s generally recognized as one of the leading advocates for the lake.

Paika is passionately concerned about the ecology of the lake and doesn’t hesitate when asked about its biggest challenge.

“Eurasian milfoil,” he replied. The invasive plant degrades the habitat and causes algae blooms. Ironically, the plant is spread by boats that inadvertently carry fragments into the lake.

Which brings up another hot topic at association meetings — boat traffic.

The increasing numbers of weekend boaters are a bane to lake residents, and jet skiers are most often singled out for complaints about recklessness.

Residents who complain about excessive boat traffic echo complaints made at the turn of the 20th century when steamboats were a nuisance.

A history of the lake, “Remembering Lake Quinsigamond from Steamboats to White City” by Shrewsbury author Michael P. Perna, notes that in the early 1900s, steamers carried from 25,000 to 30,000 passengers around the lake in the summer.

“Back at the turn of the century, Lake Quinsigamond was the Cape Cod of Worcester,” Paika said.

Today the waterfront properties of Lake Quinsigamond continues to attract people looking to build their dream home here! “People don’t happen to live on the lake,” Paika said, “They want to.”

Call us today! To get your waterfront homes Shrewsbury Ma!


Full credit for this article goes to Margaret LeRoux.


Want to help sell this house? I am willing to partner up with a realtor who will assist in selling the property by giving 3% of the to-be-determined sale price.